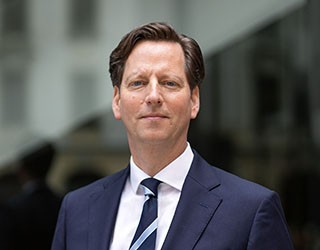 PD Dr. Christian Growitsch took on his position as institute director of the Fraunhofer Center for International Management and Knowledge Economy IMW in Leipzig in May 2021.

Since January 2020, Dr. Christian Growitsch has been Director of Industrial Solutions in the Executive Board division Technology Marketing and Business Models at the headquarters of the Fraunhofer-Gesellschaft, in Munich. From 2018 to 2019, he was deputy institute director of Fraunhofer IMWS, and from mid-2017 to 2019 he also headed the Center for Economics of Materials CEM in Halle (Saale), which became a branch of Fraunhofer IMW in January 2020.

PD Dr. Christian Growitsch studied business administration, economics and social sciences in Hamburg and Lüneburg. He received his doctorate from the Universities of Lüneburg and Cambridge. In 2010, he completed his habilitation at the Martin Luther University Halle-Wittenberg, followed by his re-qualification at the University of Cologne in 2012.

PD Dr. Christian Growitsch has been a Research Fellow of the Energy Policy Group at the University of Cambridge since 2016. Since 2014, he has been a member of the Scientific Advisory Council of the Ludwig Erhard Foundation, and since 2013 he has also been an elected member of the “Regulation” working group of the Schmalenbach Foundation.

Further publications can be found on the website of PD Dr. Christian Growitsch.

A list of the publications can also be downloaded below.

Head of the Institute of Fraunhofer IMW