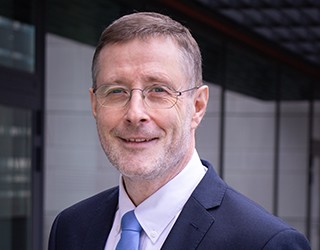 Dr. Thore Dietrich has been working at Fraunhofer IMW since January 2019. At the same time, he has also served as CTO for Charité, a spin-off company from a start-up involved in developing autologous heart valves for children with congenital heart defects, since 2018.

While working as a graduate biologist in 2002, Dr. Dietrich received his doctorate in medicine (Dr. rer. medic.) in the field of university medicine for the faculty of radiology at Humboldt University in Berlin. From 2001 to 2016, he headed operational business for the German Heart Center Berlin (DHZB) for Imaging, a cardiology research laboratory. He was involved in developing and managing preclinical experimental research. His focus was on magnetic resonance imaging and the development of new contrast agents for medical imaging. He was also involved in developing innovative optical methods for new targets in MRI imaging for dual-labeled contrasts. In doing so, he coordinated and planned projects with start-ups and the pharmaceutical industry. From 2008 to 2017, Dr. Dietrich was involved in teaching at the DHZB's Cardio Magnetic Resonance (CMR) Academy. He was simultaneously responsible for biological safety at the DHZB’s genetic engineering plant. In 2016 he received his MBA from the University of Potsdam. From November 2016 until the end of 2017 he served in the DHZB’s project management department.