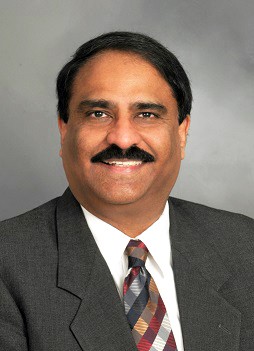 Dr. Srinivas Pentyala received his PhD in 1989 and is currently the Director of Translational Research and Professor of Anesthesiology in Stony Brook University Medical Center (SBUMC), New York, USA. He has joint appointments in the departments of Orthopedic Surgery & Rehabilitation, Urology, Health Sciences, Physiology and Biophysics at SBUMC. Dr. Pentyala is also an adjunct professor in Suffolk College and Adelphi University teaching, mentoring and advising undergrad, graduate, medical students and medical residents.

Dr. Pentyala is currently working on several translational and applied research projects that includes drug discovery, diagnostic markers, and devices for health care settings. His research has received funding from Industry, Federal and State sources. Dr. Pentyala has several publications and patents to his credit. He received several honors and awards not only for his role as a researcher but also as an educator. He is the recipient of “Pride of India Award”, “Gold Award for contributing to science and Education” and several “Excellence Awards” for his contributions to the field of research and education. He was recognized as Stony Brook University’s “Most Influential Professor/Faculty Member” and received “Special Educator Award”, “Catacosinos Cancer Scholar Award” and “Excellence in Community Service Awards” to name a few. He is a “National Academy of Inventors Member” and is a member of several educational and professional societies. Dr. Pentyala initiated a summer “Science And research Awareness Series” (SARAS) in 2004 at SBUMC which is now recognized as one of the most popular biomedical sciences enrichment programs for students in USA. Recognizing the efforts rendered and the tremendous impact of SARAS program on STEM education, Dr. Pentyala, received “President’s Team Achievement Award” as the initiator and coordinator of SARAS.

Dr. Pentyala is the founding director of several biotech and health care companies. He serves on the advisory board of several journals, national and international biotech and health care companies, and research institutes. Dr. Pentyala is instrumental in bridging the gap between academia and industry and started several initiatives of Knowledge/Technology Transfer, Innovation, Intellectual property Protection,  etc., that brings discoveries and inventions of academia to commercialization by interacting with industry partners.