The collaborative project "DataLab WestSax" of the Fraunhofer IMW and the West Saxon University of Applied Sciences Zwickau works with companies to leverage previously unused data for value creation. It is the first value creation lab in the West Saxony region that offers medium-sized enterprises a protected and cost-neutral environment for experimenting with data-based business models. New forms of value creation based, for example, on inter-company data exchange, the sale of data-based expertise or data-based collaboration on digital platforms can be new business pillars for companies. However, internal barriers slow down the path to data-based value creation, especially for SMEs. Companies often lack concrete data usage and implementation ideas. A lack of resources and a lack of trust are further barriers. As a result, there is often untapped potential for value creation in companies - despite data already existing or accumulating.

Led by Fraunhofer IMW, the DataLab WestSax uses five "living labs" to test digital, data-based solutions. Together with the West Saxon University of Applied Sciences Zwickau, the research team will discuss experiences in real world experiments with companies in the West Saxon region and summarize them in an overarching "think tank". The think tank bundles existing knowledge and systematically identifies trends and events that may be relevant for data-based value creation in the region in a structured process. It also networks science, business and municipal institutions through suitable interaction formats.

Range of services of the project partners

During the three-year project period, Fraunhofer IMW scientists will provide support, for example, in the development of data value creation strategies or advise on the possibilities of the platform economy. The research team of the West Saxon University of Applied Sciences Zwickau supports the medium-sized enterprises, for example, with data-based decision-making systems. Simba n3 GmbH will support prototype development as an IT service provider in the field of data science, digitization and IT solution development.

The "DataLab WestSax" will start with five real world experiments involving a total of seven application companies. Initially, the research team will start with the two initial scenarios: "Idea available, data missing" and "Data available, ideas missing".  Interested companies that would like to collaborate with the research team from Leipzig and Zwickau in a real world experiment are welcome to contact the project team at kontakt@datalab-westsax.de.

The official kick-off event of the project will take place together with Minister of State Thomas Schmidt and the team of the simul+ initiative of the Saxon State Ministry for Regional Development on 16.5.2022 in the Forum Mobile of the West Saxon University of Applied Sciences Zwickau. The agenda and registration information will be published on the project website in due time.

Companies surveyed by the study cite significantly more obstacles than drivers and opportunities when it comes to data-based value creation.

"Digitalization is already challenging, so there is currently no time for developments in the direction of data-based value creation."

In the previous projects on data-based value creation of Fraunhofer IMW within the digital project unit Data Mining and Value Creation, many barriers revealed themselves, especially for medium-sized enterprises: Value creation with data sometimes requires high investments at the beginning, needs new talents and competences and requires the possibility of cheap and easy trial and error. At the same time, companies find it difficult to develop concrete ideas for data use and to assess the value of their data. Lack of resources for such - currently still strategic - developments and lack of trust in existing data infrastructures add to the list of challenges.

Since these challenges are mostly internal, there is great design potential here in the still young innovation cycles of data-based value creation. 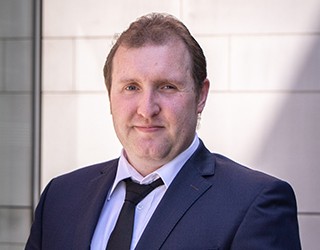 Deputy Head of Data and Platform Based Value Creation Unit